You are here: Home / Birthdays / (BIRTHDAYS) We LOVE Spiderman!
Spread the love 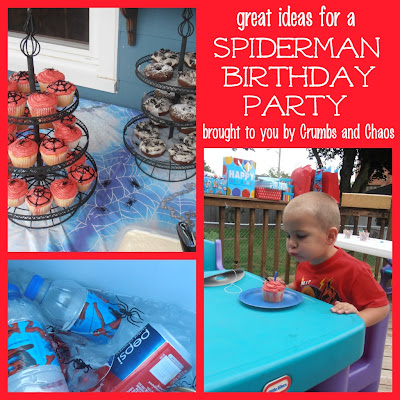 To be completely honest, I hate to do things normal.  I don’t always like to do what people expect of me and I love to work and play outside the box!  SO… when I began thinking of what Jonah’s 4th birthday party would look like I didn’t really think Spiderman would be involved.  His cousin, Kael, had already had a Spiderman birthday this year and I just didn’t think we would do a repeat.  HOWEVER…  as the birthday approached the love for Spiderman only got stronger and here we are.  With a wonderful Spiderman party behind us.  Here is what we did to throw a exciting somewhat out of the box Spiderman Party. 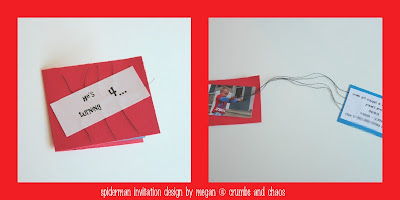 INVITATIONS
These invitations are my favorite part!  It was one of my best ideas to date.  When I made the prototype one night I showed my husband and a friend of ours and the conversation went like this…
FRIEND:  Wow this is so cool!  Where did you get this idea??
HUSBAND:  Pinterest…
ME:  WHAT???? This was an original idea!!!
I am proud of these because I love original ideas and I haven’t seen this anywhere, EVEN Pinterest (which is a pretty rare thing these days!)
I started by cutting out a red card and a blue insert to fit inside of the red card.  Then I printed off one paper to say “He’s turning 4!”, and another to say all of the details for the party.  Then I took a picture of Jonah shooting his ‘web’.  Then I attached them with string to imitate a web being shot out with the details attached. FOOD & CAKE
We went simple for the food by just having hotdogs and sausages on the grill.  Along with chips, salsa, fruit and veggies.  For dessert I typically make cake or cupcakes and then because it is also Ben’s birthday I make something with Oreo’s for him.  In the past I made Oreo Brownies or just had Oreos and milk.  This year, I made Cookies n’ Cream Donuts along with white cupcakes with a wonderful buttercream frosting.  Then I piped black webs on half of them and put black plastic spiders on the other half.  Luckily this August birthday comes right when the Halloween stuff is being put on the shelves. 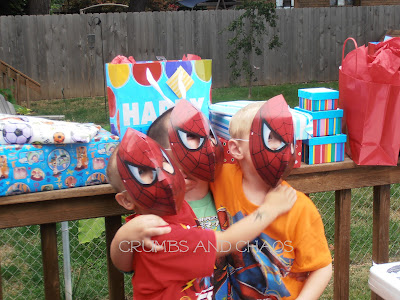 To make the Spiderman theme visible, I did a few things…
« Hello world!
5 on Friday: Tomatoes »