You are here: Home / Dessert / Individual Chocolate PB Trifles
Spread the love
Alas, it was my Mother-in-law’s birthday and I was in charge of the dessert.  I spent some time trying to decide what the perfect dessert would be.  I knew she loved peanut butter and chocolate so when I came across the trifle idea on Pinterest, it literally screamed her name.  ONE PROBLEM…. I don’t own a trifle dish! Becca suggested clear plastic cups and it dawned on me that this would be the perfect dessert for a jar!  Just like Dark Chocolate Brownies I made last year!  They ended up being absolutely delicious and she loved them! <whew!>
I will say that I made a few changes and would maybe do things a little differently next time.  Originally it calls for a boxed brownie mix.  It was late and I was too lazy, so I figured I would just grab some brownies from the bakery at the store.  They were out, so I ended up with brownie cookies.  Maybe a little less fudgy and a little more chewy but they worked great!  I also ended up buying a bag of the miniature peanut butter cups.  They worked well, but there are also some other options.  I personally don’t love the chocolate peanut butter ratio in the tiny peanut butter cups, BUT they are sold in bags and wouldn’t require any upwrapping or chopping.  It also would look really adorable with a few of them as your topping.  You could also go the regular sized route if that’s what you have or all you can find.  Keeping in mind of course that there is a lot more peanut butter in those and you would still have to do the unwrapping and chopping.  I don’t think that any of it really makes a huge difference because it is the flavors you are after.  But I thought you would like to know you had a few options! 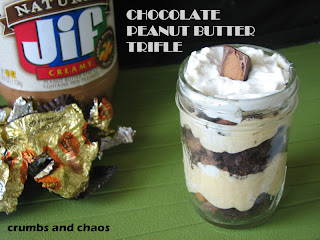 You can find us linking up HERE!