You are here: Home / Appetizers / Beef Empanadas
Spread the love
It has been 3 years since I lived in the NJ/NYC area.  However, my taste buds (and stomach) have never forgotten the savory little pastry that I was introduced to… The Empanada!  We had them a few different times and they always came from very authentic restaurants and had the most amazing flavors.  I have always wanted to try them and now was the time.
I started doing a little research on empanadas and discovered that they are an extremely popular food world wide and come with a variety of different fillings.  I know that these may not be a true Mexican food or the Mexicans may use different fillings, but I found a version that sounded delicious and went with it.
I cut a corner by using pie crust instead of empanada dough because I didn’t have time to search local grocery stores that may carry them and I also didn’t have time to make the dough myself, but that of course is a very good option and there are plenty of recipes for that around the web.
The one I made is from a blog called From Argentina with Love.  After spending some time on the site I discovered a handful of other empanada fillings that I can’t wait to try and also discovered that empanadas are a perfect food to freeze.  Just follow the recipe up until the egg wash stage, then flash freeze on a cookie sheet for about 30 minutes and then bag them up for use at a later time.  Just thaw, add the egg wash, and bake.
These would be a fantastic appetizer or party food but I used mine as a meal and served them with Mexican rice and actually used Sriracha Sauce for dipping (because it is what I had on hand!).  The added spice was fantastic but I also think you could use any salsa for dipping. 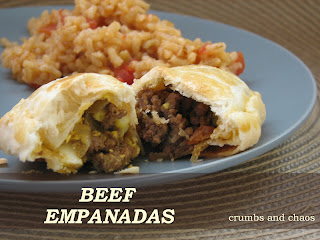