I originally saw this recipe in the January/February 2011 issue of Everyday Food Magazine because it was opposite the Mocha Chip Angel Food Cake that I was making.  When flipping back through the magazine, I saw it again and realized that I had all the ingredients already on hand (I LOVE when that happens)!  I made it the next day and not only was it simple to make but it makes it a lot easier to finish when you know that some healthy substitutions have been made.  It uses egg whites and ricotta instead of traditional egg yolks and heavy whipping cream.  According to the magazine, it only has 166 calories per serving.

I will say that the texture is not going to be as smooth and creamy as a traditional mousse, but what it may lack in texture it makes up for in flavor.  To serve, you can sprinkle with some additional cocoa powder or do what we did (even though I’m pretty sure it takes away from everything I mentioned above!), we topped ours with whipped cream and an oreo, because that’s just the kind of family we are! 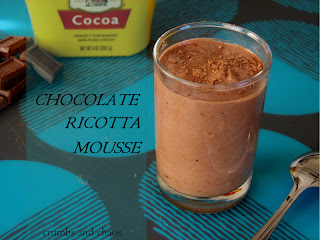 Chocolate Ricotta Mousse
by Megan {Crumbs and Chaos}
Keywords: dessert chocolate
6019362
Ingredients
Instructions
In a food processor, pulse ricotta and cocoa powder until completely smooth (this is very important because if you don’t get it completely smooth, you will still have the ‘grit’ of the ricotta). Transfer mixture to a large bowl.
Place egg whites, sugar, and pinch of salt in a medium heatproof mixing bowl set over (not in) a pot of simmering water. Cook, whisking constantly, until sugar dissolves and mixture is warm to the touch. Remove bowl from heat and, using an electric mixer, beat mixture on high until stiff glossy peaks form. With a rubber spatula, gently fold egg-white mixture into ricotta mixture until combined. Divide mousse among four glasses or small bowls. Refrigerate until set, 3 hours or up to 1 day. ENJOY!
Powered by Recipage

You can find us linking up HERE!