You are here: Home / Cake / Cookie Dough Cupcakes
Spread the love
Today we are so excited to have a guest blogger (who also happens to be my sister-in-law!), Brittany.  You may remember her from a previous post she did for us last February.  We are so happy to have her back, especially when she brings along these delicious treats! 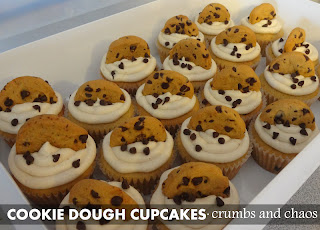 I originally found this recipe on Pinterest which then led me to Alli’N’Sons.  The picture alone was enough to make me want to try the recipe!  I’m not a huge baker (I would rather cook!), but I really wanted to try these.  We had an upcoming bake-off at our church and I decided to try these for it.  I ended up coming in 3rd place- People’s Choice, and I was pleased with that!  Megan came in 2nd!  So, she likes to gloat that her Chocolate Chip Cookie Dough Brownies beat these cupcakes!

This recipe is rather time consuming- not hard, just time consuming (trust me, if I can do it, anyone can do it!).  However, if you’re a cookie dough fan like me- it’s well worth it! 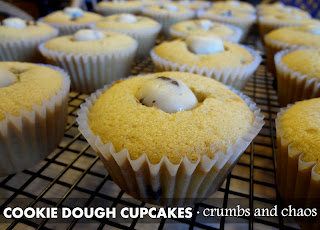 For the cupcake, you’ll need:

For the filling, you’ll need:

And, for the frosting, you’ll need:

Instructions
Step {ONE}- Cupcakes
1. Preheat the oven to 350° F.
2. Line two cupcake pans with paper liners, 24 total.
3. Using an electric mixer combine the butter and brown sugar beating on medium-high speed until light and fluffy, about 3 minutes.
4. Add the eggs one at a time, beating well after each. Scrape the sides of the bowl as needed.
5. In a medium bowl combine the flour, baking powder, baking soda, and salt.
6. Add 1 cup of the flour mixture to the mixer bowl on low speed, then 1/3 of the milk. Continue alternating the flour mixture and milk, ending with the flour. Mix after each addition just until incorporated.
7. Blend in the vanilla and almond extracts.
8. Using a spatula, fold in the chocolate chips.
9. Using an ice cream scoop, divide the batter evenly between the prepared cupcake liners.
10. Bake for 18-20 minutes, until a toothpick inserted in the center comes out clean.
11. Cool in the pans for 5-10 minutes, before transferring to a wire rack to cool completely.
Step {TWO}- Filling
1. Combine the butter and sugar in a mixing bowl. Cream on medium-high speed until light and fluffy, about 2 minutes.
2. Add in the flour, sweetened condensed milk and almond extract, mixing until smooth.
3. Stir in the chocolate chips.
4. Cover with plastic wrap and chill in the fridge, for at least an hour. You can also prepare this ahead of time and store in the fridge for several days (but, be warned- you might frequent the fridge more than you’d like!).
5. Once chilled, roll the dough into 24 balls, approximately one-inch.
6. After the cupcakes have cooled, cut a cone-shaped portion out of the center of each cupcake using a small paring knife. Fill each cupcake with a cookie dough ball. You may need to form a cone shape with the cookie dough to get it to fit properly.
Step {THREE}- Frosting
1. Using an electric mixer, beat together the butter and brown sugar until creamy.
2. Mix in the powdered sugar until smooth.
3. Beat in the flour and salt.
4. Add the milk, vanilla and almond extracts until smooth and well blended.
5. Frost the filled cupcakes, sprinkling with mini chocolate chips. Top with half of mini chocolate chip cookie.
6. The frosting can also be made in advance and stored in the fridge. Before using, bring the frosting to room temperature. Using an electric mixer beat the frosting on medium speed, adding a tablespoon or two of milk to soften it up.
Powered by Recipage
This recipe may to linked to these fabulous parties: SUNDAY Sharing Sundays – Everyday Sisters,Sweet Indulgences Sunday – A Well Seasoned Life, Church Supper – Everyday Mom’s Meals, Weekend Warrior Party – Ask Anna Moseley, Sunday Scoop – I Heart Naptime, Nifty Thrifty Sunday – Nifty Thrifty Things MONDAY Melt In Your Mouth Monday – Make Ahead Meals for Busy Moms, Made By You Monday – Skip To My Lou, Mingle Monday – Add A Pinch, Makin’ You Crave Monday – Mrs. Happy Homemaker, Must Try Mondays – My Favorite Finds,Snap, Craft & Blog til Your Heart’s Content – A Content Housewife , More the Merrier Monday – DIY Home Sweet Home, Mix It Up Monday – Flour Me With Love , Monday Link Party – Polish the Stars, Mop It Up Mondays – I Should Be Mopping the Floor, Cowgirl Up – Crafty Texas Girls TUESDAY Tasty Tuesday – Nap Time Creations, Totally Tasty Tuesday – Mandy’s Recipe Box, Tuesday Time Out – Reasons to Skip the Housework, Tuesday Talent Show – Chef in Training, Crazy Sweet Tueasday – Crazy For Crust, Tasty Tuesday – 33 Shades of Green, Totally Inspired Tuesdays – The Inspired Collection, Trick or Treat Tuesdays – Inside BruCrew Life WEDNESDAY These Chicks Cooked – This Chick Cooks, Recipe Linky – Newlyweds Blog, What I Whipped Up Wednesday – Sugar and Dots, Mrs. Fox’s Sweet Party – Mrs. Fox’s Sweets, Link It Up Wednesday – Junk In Their Trunk, Rock n’ Share Party – The Shady Porch, Share & Wow Wednesday – A Turtle’s Life For Me, Cast Party Wednesday – Lady Behind the Curtain, Wednesday Wowsers – Oopsey Daisy THURSDAY Sweet Treats Thursday – Something Swanky, It’s a Keeper – Everyday Tastes, Things I’ve Done Thursday – Bear Rabbit Bear, Tastetastic Thursday – A Little Nosh, One Stop Thursday Party – Digital Scrapbooking Made Easy Full Plate Thursday – Miz Helen’s Country Cottage, Chic & Crafty Thursdays – The Frugal Girls, Crazy Cute Thursdays – Between U & Me, Taking A Timeout Thursday – Mom On Timeout FRIDAY Sweet Tooth Friday – Alli-n-Son, I’m Lovin’ It – Tidy Mom, Fusion Friday – Jennifer Cooks, Friday Favorites – Simply Sweet Home, Friday Flair – Whipperberry, Feature Friday – Blissful and Domestic, 4th Friday Finale – Over The Big Moon, Delicately Constucted Fridays – Delicate Construction, Shine On Friday – One Artsy Mama,Feature Friday Free-For-All – Five Days…5 Ways, Weekend Potluck – The Country Cook, Kitchen Fun and Crafty Friday – Kitchen Fun with My 3 Sons  SATURDAY Seasonal Inspiration – Crumbs and Chaos, Strut Your Stuff Saturday – Six Sister’s Stuff, Show and Tell Saturdays – Be Different Act Normal, Sweets For a Saturday – Sweet As Sugar Cookies, Tip Junkie, Everybody’s Creative Endeavor – Every Creative Endeavor, Tip Junkie, Once Upon A Weekend – Family Ever After, Weekend Wrap Up Party – Tatertots and Jello, Sweet Saturday – The Gingerbread Blog
« (Crockpot) Pork Chops with Mushroom Sauce
5 on Friday: School’s out…what’s for breakfast? »