I originally saw this bread months ago when I first signed up for Stumbleupon. It was immediately given a thumbs-up and has never been forgotten. When I saw it again this past weekend on Pinterest, I knew that I had to make it IMMEDIATELY. I was not disappointed!

Having made bread in the past, the process was not new to me. However, I did find that this particular recipe was easy follow and make. And as I was rolling the dough out I found myself thinking that this was possibly the best dough I had ever made!

SO if the dough itself was great… imagine how much better it was when the butter, cinnamon, and sugar were added. My house smelled absolutely delicious and I knew that this bread would not last long. It came out of the oven around 3 pm and it was half gone before my husband came home from work. The rest was gone by breakfast the next day! In other words…. it was gone in less than 24 hours! 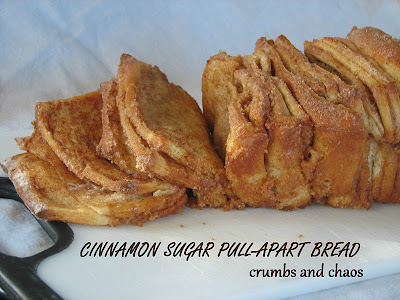 Instructions
In a large mixing bowl whisk together 2 cups flour, sugar, yeast, and salt. Set aside. Whisk together eggs and set aside.
In a small saucepan, melt together milk and butter until butter has just melted. Remove from the heat and add water and vanilla extract. Let mixture stand for a minute or two, or until the mixture registers 115 to 125 degrees F.
Pour the milk mixture into the dry ingredients and mix with a spatula. Add the eggs and stir the mixture until the eggs are incorporated into the batter. The eggs will feel soupy and it’ll seem like the dough and the eggs are never going to come together. Keep stirring. Add the remaining 3/4 cup of flour and stir with the spatula for about 2 minutes. The mixture will be sticky.
Place the dough is a large, greased bowl. Cover with plastic wrap and a clean kitchen towel. Place in a warm space and allow to rest until doubled in size, about 1 hour. *The dough can be risen until doubled in size, then refrigerated overnight for use in the morning. If you’re using this method, just let the dough rest on the counter for 30 minutes before following the roll-out directions below.
While the dough rises, whisk together the brown sugar, cinnamon and nutmeg for the filling. Set aside. Melt 2 ounces of butter until browned. Set aside. Grease and flour a 9x5x3-inch loaf pan. Set that aside too.
Deflate the risen dough and knead about 2 tablespoons of flour into the dough. Cover with a clean kitchen towel and let rest for 5 minutes. On a lightly floured work surface, use a rolling pin to roll the dough out. The dough should be 12-inches tall and about 20-inches long or as large as the dough will go. Use a pastry brush to spread melted butter across all of the dough. Sprinkle with ALL of the sugar and cinnamon mixture.
Slice the dough vertically, into six equal-sized strips. Stack the strips on top of one another and slice the stack into six equal slices once again. You’ll have six stacks of six squares. Stand the dough squares up in the bread pan. Place a kitchen towel over the loaf pan and allow in a warm place for 30 to 45 minutes or until almost doubled in size.
Place on the center rack of the oven preheated to 350 degrees F. Place loaf in the oven and bake for 30 to 35 minutes, until the top is very golden brown. A nice, dark, golden brown will ensure that the center is cooked as well.
Remove from the oven and allow to rest for 20 to 30 minutes (if that’s possible!). Run a butter knife around the edges of the pan to loosen the bread before removing.
Powered by Recipage
Recipe adapted from Joy the Baker
This recipe may to linked to these fabulous parties: SUNDAY Sharing Sundays – Everyday Sisters,Sweet Indulgences Sunday – A Well Seasoned Life, Church Supper – Everyday Mom’s Meals, Weekend Warrior Party – Ask Anna Moseley MONDAY Melt In Your Mouth Monday – Make Ahead Meals for Busy Moms, Made By You Monday – Skip To My Lou, Mingle Monday – Add A Pinch, Makin’ You Crave Monday – Mrs. Happy Homemaker, Must Try Mondays – My Favorite Finds,Snap, Craft & Blog til Your Heart’s Content – A Content Housewife , More the Merrier Monday – DIY Home Sweet Home, Mix It Up Monday – Flour Me With Love , Monday Link Party – Polish the Stars TUESDAY Tasty Tuesday – Nap Time Creations, Totally Tasty Tuesday – Mandy’s Recipe Box, Tuesday Time Out – Reasons to Skip the Housework, Tuesday Talent Show – Chef in Training, Crazy Sweet Tueasday – Crazy For Crust, Tasty Tuesday – 33 Shades of Green, Totally Inspired Tuesdays – The Inspired Collection, Trick or Treat Tuesdays – Inside BruCrew Life WEDNESDAY These Chicks Cooked – This Chick Cooks, Recipe Linky – Newlyweds Blog, What I Whipped Up Wednesday – Sugar and Dots, Mrs. Fox’s Sweet Party – Mrs. Fox’s Sweets, Link It Up Wednesday – Junk In Their Trunk, Rock n’ Share Party – The Shady Porch, Share & Wow Wednesday – A Turtle’s Life For Me THURSDAY Sweet Treats Thursday – Something Swanky, It’s a Keeper – Everyday Tastes, Things I’ve Done Thursday – Bear Rabbit Bear, Tastetastic Thursday – A Little Nosh, One Stop Thursday Party – Digital Scrapbooking Made Easy Full Plate Thursday – Miz Helen’s Country Cottage, Chic & Crafty Thursdays – The Frugal Girls, Crazy Cute Thursdays – Between U & Me FRIDAY Sweet Tooth Friday – Alli-n-Son, I’m Lovin’ It – Tidy Mom, Fusion Friday – Jane Deere Blog, Friday Favorites – Simply Sweet Home, Friday Flair – Whipperberry, Feature Friday – Blissful and Domestic, 4th Friday Finale – Over The Big Moon, Delicately Constucted Fridays – Delicate Construction, Shine On Friday – One Artsy Mama,Feature Friday Free-For-All – Five Days…5 Ways  SATURDAY Seasonal Inspiration – Crumbs and Chaos, Strut Your Stuff Saturday – Six Sister’s Stuff, Show and Tell Saturdays – Be Different Act Normal, Sweets For a Saturday – Sweet As Sugar Cookies, Tip Junkie, Everybody’s Creative Endeavor – Every Creative Endeavor, Tip Junkie, Once Upon A Weekend – Family Ever After
« Reese’s Cheesecake Brownies
Seasonal Inspiration: 1-14-12 »