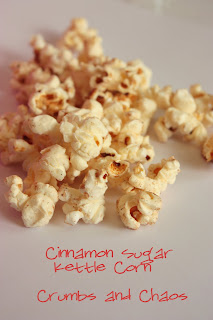 Sweet and salty.
Cinnamon and Sugar – it’s a great combo…there’s cinnamon roasted almond cones, cinnamon sugar chips, cinnamon sugar pretzels or cinnamon sugar snack mix.
A perfectly addictive snack.
Maybe it should be called SIN-amon, I mean it is hard for me to stop eating anything that has cinnamon it!
If you’ve never made popcorn at home, it is pretty simple and healthier the kind that comes in a microwaveable bag.  This only has 5 ingredients and makes a quick afternoon snack! 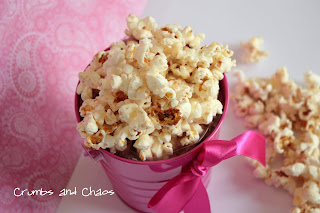 CINNAMON SUGAR KETTLE CORN
Printable Recipe Here
1/4 cup unpopped POPCORN
3 Tablespoons CANOLA OIL
2 Tablespoons SUGAR
1/4 teaspoon CINNAMON (or more, if you like)
SALT, to taste*
In a small bowl, mix cinnamon and sugar and set aside.  Put a large empty bowl near the stove.
Place popcorn in a 2-quart saucepan (one that has a lid) and pour oil over the top.  Shake pan to evenly coat kernels with oil.
Put the pan, uncovered, on a burner at medium to medium-high heat.  In 2-3 minutes, the oil will start to sizzle.  When the first kernel or two pops, dump in the cinnamon and sugar mixture and quickly put the lid on.
Holding the handle of the saucepan, shake pan back and forth and side to side while keeping on the burner. (Popcorn may take a minute to start popping after you put the sugar on.)  Keep shaking until popping slows
Immediately empty into bowl, be careful the sugar will be hot.  Season with salt to taste and serve!
*I like to use popcorn salt for making popcorn, it’s a little bit finer than regular salt.  I found it at Walmart near the other salt.
Recipe Source: Vittles and Bits
This post is linked to These Chicks Cooked, Fusion Friday
« Mango and Black Bean Salsa
Traditional Basil Pesto – Product Review »