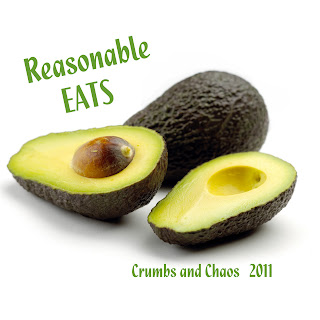 I found this recipe in an email that I received from Kraft Foods over a year ago.  Being a lover of crab rangoon, I decided it was a must try.  It has always been on my list, but for some reason it never made it into the kitchen.  UNTIL NOW!!!  The only thing that I regret is waiting so long to try it.  They are tasty!  The flavor is superb and because of the reduced fat ingredients and baking instead of frying, they are healthier for you than most crab rangoon!  They save 80 calories and 6 grams of fat per serving!  They would be a great addition to any Super Bowl spread, and are even wonderful reheated!
BAKED CRAB RANGOON
Printable Recipe Here 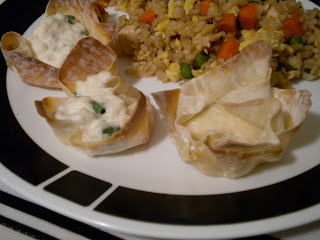 Directions
Preheat oven to 350 degrees.  Mix the first four ingredients.  Place one wonton wrapper in each of 12 muffin cups sprayed with cooking spray.  Bake the wrappers for 5-7 minutes or until lightly browned.  Remove from oven and fill each cup with crab mixture.

You now have two options.  The original recipe tells you to then fill each shell with crab mixture and bake for an additional 6-8 minutes or until filling is heated through.  I made them like that the first time and while I thought they were wonderful, I also wondered what it would be like with more of the crunchy stuff (which I love!).  I experimented and also tried placing another wonton wrapper on top of the crab mixture, enclosing completely.  Then cook it for the remaining 6-8 minutes, or until golden brown.

They are both very good and it really comes down to personal preference.  But I will tell you that  in our house, with both on the table, the second version that is completely enclosed was voted the favorite!

*Neufchatel Cheese is a reduced fat version of cream cheese, so look for it next to the cream cheese at your grocery store.
*Won ton wrappers can usually be found in the refrigerated case of the produce section.

This post is linked to LifeasMOM’s Ultimate Recipe Swap