Two years ago this week, Ben and I were blessed by the birth of our baby boy, Jonah. But what makes it even more special is that he was born on Ben’s birthday! So father and son will always be able to share their day!

This past Sunday we threw Jonah his second birthday party which happened to be Elmo themed! It was a lot of fun and I am going to give you a few ideas that we used, in case you ever need to throw an Elmo party!!! 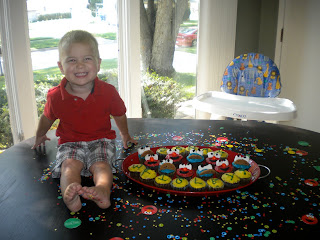 INVITATIONS
I made these invitations in a few simple steps. They can be changed to accommodate any Sesame Street character. I typed out the party details, and the famous Sesame Street saying changing the words to “this party is brought to you by the letter J and the number 2”. You can change the letter to the first letter of your child’s name and the number to their age. Then I layered it with a picture of Jonah, ribbon, contrasting cardstock, and a picture of Elmo/Sesame Street. The pictures of Elmo and Sesame Street logo are actually confetti that I found at the party store. I used what I needed and then was able to use the rest as decoration. 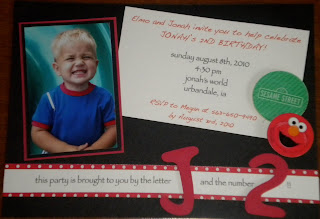 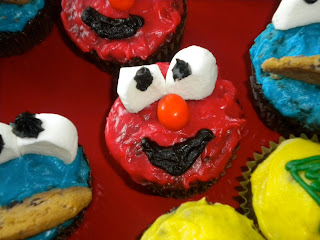 COOKIE MONSTER
Using food coloring make blue frosting. Frost each cupcake. Cut a large marshmallow into four pieces. Use two for the eyes. Cut a Chips Ahoy cookie in half and place it where the mouth would be. Then using black frosting, finish the eyes. 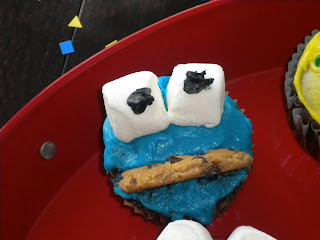 DECORATIONS
We used Sesame Street confetti from the party store, along with Elmo party hats, plates and napkins.
FOOD
This really has nothing to do with Elmo, but another tip to make your child’s party a success. Have a meal that they actually enjoy! Jonah doesn’t really like hotdogs or hamburgers, so while that seemed like the best option, we knew he wouldn’t eat it. So instead we opted for his favorite food, CEREAL! We picked three of his favorite kinds and served with cold milk. Then we had a fruit bowl, juice, and chocolate for those chocolate milk lovers! It wasn’t your traditional party food, but everyone seemed to enjoy it, especially the birthday boy!! 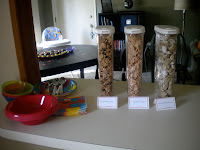 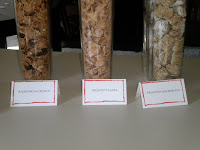