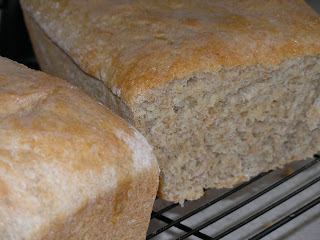 At the end of 2008, I began doing some research on homemade bread. At the same time I was preparing to introduce our 5 month old to solid foods and was fascinated by the idea real food, with no additives and preservatives, while also saving money.

I began the process by starting with a recipe that was passed down from my grandma. It was an interesting first start. Because the recipe was so old and my grandma wasn’t around for questioning, I had to guess on a few measurements. I had no idea what these quantities would amount to. I ended up with FOUR loaves of white bread. It wasn’t perfect and I don’t think that any first bread is. But it was a start and has been a learning experience for me.

I experimented with many types of bread, learning the ins and outs of yeast, bread flour, kneading, and rising. I also began to use wheat flour in some of the bread to increase the nutritional value. Of all the recipes that I have tried, my family’s absolute favorite is a Honey Oatmeal Bread. It is a soft bread with a sweet flavor. We love it with Peanut Butter and Jelly on it, but it makes a fantastic piece of toast and as with most homemade bread it is amazing warm out of the oven with a little bit of butter!!

Directions
In a large mixing bowl, combine boiling water, oats, 1/2 cup honey, butter, and salt. Let stand for 1 hour. In a small bowl, dissolve yeast in warm water. Let stand until creamy, about 10 minutes. Pour the yeast mixture into the oat mixture. Add 2 cups of flour; mix well. Stir in the remaining flour, 1/2 cup at a time, beating well after each addition. When the dough has pulled together, turn it out onto a lightly floured surface and knead until smooth and elastic, about 20 minutes. Lightly oil a large bowl, place the dough in the bowl and turn to coat with oil. Cover with a damp cloth and let rise in a warm place until doubled in volume, about 1 hour. Deflate the dough and turn it out onto a lightly floured surface. Divide the dough into two equal pieces and form into loaves. Place the loaves into two lightly greased 9×5 inch loaf pans. Cover the loaves with a damp cloth and let rise until doubled in volume, about 40 minutes. Bake at 375 degrees F for about 30 minutes or until the top is golden brown and the loaf sounds hollow when tapped. Remove loaves from pans, brush tops of loaves with 2 tablespoons honey and sprinkle with oats. 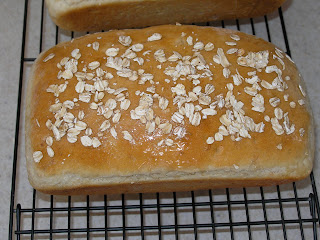 I encourage you to try your hand at making bread. Just remember, that the first try will probably not be your best try and it takes time and practice to get the yeast to dissolve just right and the bread to rise in the right amount of time. But keep on trying! If you have never had homemade bread fresh from the oven it is a flavor that will keep you wanting more!